This is a photo of a Thomas Cook & Son ticket entitling travel to Jeddah and back from Bombay and onwards to an undisclosed location during 1886. Although the ticket has not been completed by its holder, there are options to travel by steamboat from Jeddah to Bombay and back. This trip, a pilgrimage to Mecca ('Hajj'), was Thomas Cook's premier package tour back in the late 19th century as they had been appointed the official travel agents for the Hajj by the British colonial government. The ticket of this trip, considered to have formed one of Britain's oldest package holidays, has been discovered by researchers at St John's College, University of Cambridge in 2015. 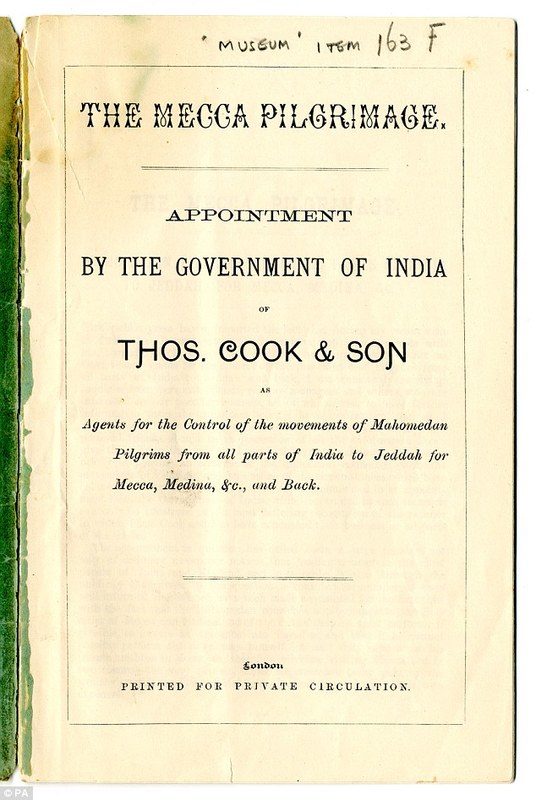 The booklet calls the tour 'The Mecca Pilgrimage' describing a trip designed for the 'control of movements of Mahomedan Pilgrims from all parts of India to Jeddah for Mecca, Medina and back.' It also reads that the Company was appointed by the 'Government of India', back then the British colonial government, to lead these pilgrimages. In the 1880's, with more of its Muslim subjects than ever traveling to the Arabian Holy City, the colonial government had turned to Thomas Cook and Son, which became the official travel agents for the Hajj in a bid to improve conditions.

In the late 1880’s John Mason Cook left for India with the blessing of the Empire, which viewed his mission along diplomatic terms by fostering the wealthy natives of both the Empire and India, the ruling classes of the conquering and conquered, to visit each other’s nations. Cook established offices in Bombay and Calcutta, forming the ‘Eastern Princes’ Department’ that arranged the extravagant tours of Indian Princes to Queen Victoria’s Jubilee celebrations. In addition, the company was tasked with reorganizing the pilgrim traffic from India to Mecca, and given a virtual government monopoly[1]. Although Cook’s company had evolved significantly over the years, a transition that many may perceive as one from good to bad, Cook’s key role as a pioneer of the travel agency business and his contributions to the development and innovation of modern tourism is ultimately something to be acknowledged and praised.

This historical context provides us with a better idea about the motives, interests and background narrative surrounding this map, which was created in 1887 as the seeds of political consciousness and the independence struggle under the British were being planted in Bombay. The knowledge that Thomas Cook, who the map was named after and likely created by, was such a pioneering figure in the tourist industry and also underwent a significant evolution in his business strategy and personal vision as his company grew to eventually become associated with imperialism, informs us with not only where and how this map falls on the timeline of maps issued by his evolving company and the tourist industry, but also which timeline it belongs to in the first place (i.e. the timeline of tourism maps as opposed to that of road maps, climate maps, political maps or other types of maps). It provides us with answers to questions we had not thought to ask before, such as why the language of the map is entirely English and names of all regions and landmarks Anglicized (Kamathipura shown as Cammatteepoora, Chinchpokli as Chinchpoogly, etc.), or why the map necessarily includes visual representations of landmarks of Western names and European-styled architecture that may likely be seen as the proud accomplishments of the British Empire.