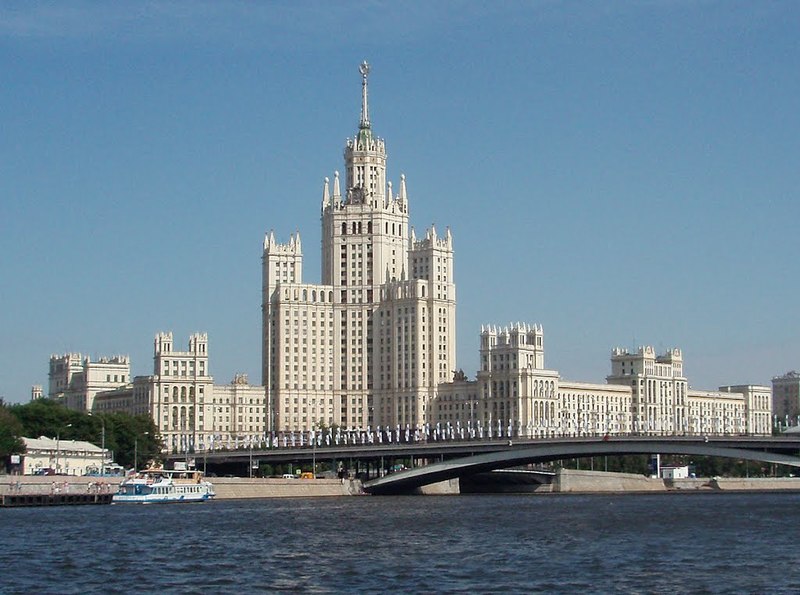 Dmitry Chechulin's Kotelnicheskaya Embankment is one of the projects most personally important to Stalin and it very much represents his leadership of post-war Russia. In 1947 Stalin announced a project of multiple skyscrapers as part of a publicity campaign, portraying the wonders of communist technology and wealth. It was clear that Stalin's project was an attempt to compete as a cultural world-power on the level of the United States (1). Some even saw this rapid new development as a declaration of a cultural 'Cold War'.Kotelnicheskaya Embankment was supposed to be the most central and visible of these great skyscrapers. Thus,Stalin had his watchful eye over the whole project and assigned Dmitry Chechulin, the Chief Architect of Moscow at the time, to the role of designer without any contest or evaluation commision (2). Despite it's lack of height in comparisson to the other sisters, the Embankment is still considered the most impactful of the buildings with its five-tower-wide base, which seems to engulf the area around it. Many, at first, criticized Chechulin for his disregard of the surrounding area's aesthetic but it became clear that it was not a disregard but rather a delliberate distaste. Chechulin intentionally made the the Embankment stick out, so that it could stand as a symbol of the new Soviet Russia overshadowing and overpowering anything from Russia's past.

"Foreigners will come to Moscow, walk around, and there are no skyscrapers. If they compare Moscow to capitalist cities, it's a moral blow to us." - Joseph Stalin in his decision for the Seven Sisters 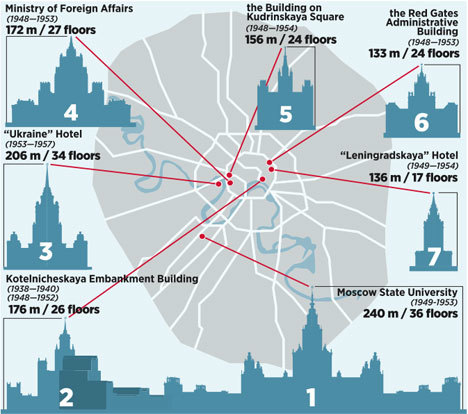 The Kotelnicheskaya Embankment is part of what is now known as the Seven Sisters, seven impecable gothic skyscrapers that seem to tower over all of Moscow. The goal of the project was to have it so that no matter where in Moscow you were, one of the buildings would be visible, reminding people of the beauties of communism (3). The problem was that while these towers rose to the heavens beautifully, the rest of Moscow's infrustructure crumbled (1). The seven skyscrapers accounted for almost half the square milage of construction during the time of their conception, plus they were built at more than twice the price per square mile. This was during a post-war period with limited resources and overpopulation. At one point, part of the Embankment even had to be turned into communal housing (3). The image of needing to use such an iconic building, which was supposed to stand for wealth and power, for the purpose of overpopulation housing represents a throughline issue with iconic Soviet architecture, which is that landmarks are often built for show rather than use. Thus is the hypocracy and irony of the USSR.

Fun Fact: There was originally supposed to be an eight sister, called the Zaryadye skyscraper, and it was going to be constructed in Red Square, the political epicenter of Moscow. It was planned to be the tallest building in the world at the time but was shut down after Stalin's death with the reported reason being that it would overshadow The Kremlin.