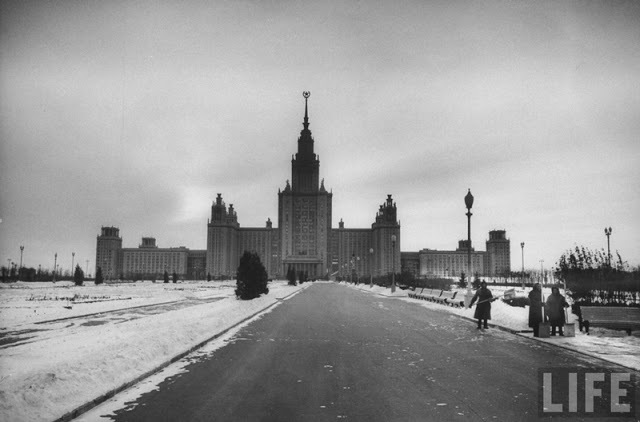 This is a historical image of the Moscow State University, and from this picture, one can observe the imposing stature of the main building. 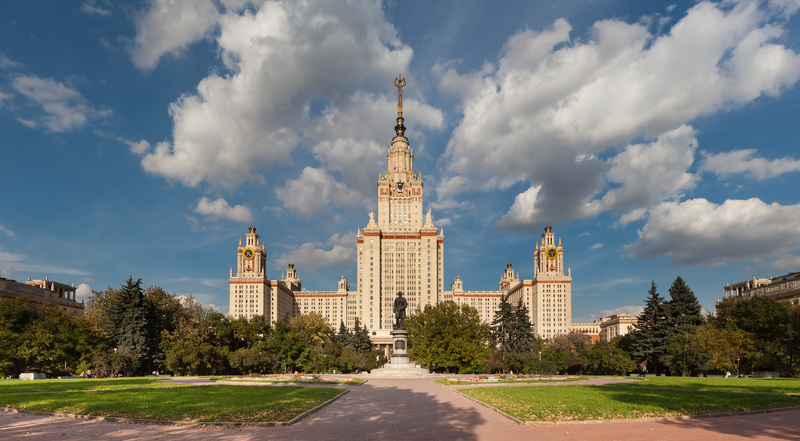 This is a contemporary image of the Moscow State University, and compared with the image from 1956, it seems as if nothing much as changed to this main structure. 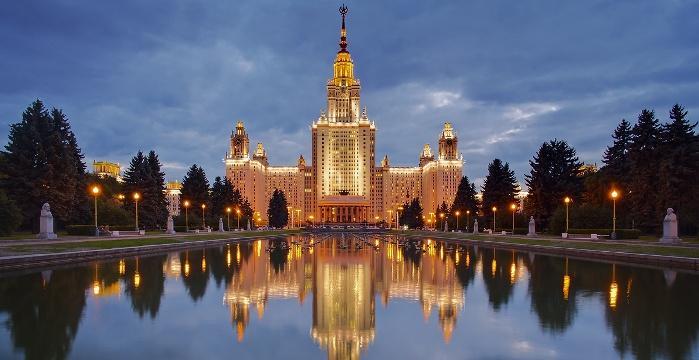 This is another contemporary photograph of the MSU, and this picture, taken at night, reveals that the body of water is another feature of the campus.

One of the most important and iconic universities in Moscow is the Moscow State University. Moscow State University, a public research university in Moscow with more than 40,000 students, was founded on January 25, 1755 by Mikhail Lomonosov, a Russian polymath, under the decree of Empress Elizabeth and is considered Russia's oldest university, albeit some people consider Saint Petersburg State University to hold the title (1,2). Even this seemingly innocuous rivalry over the title of Russia's oldest university highlights St. Petersburg and Moscow vying for dominance in Russia since both places are critical in shaping the national identity. The founding of this university is historically significant because it was highly dependent on the vision of and the ambitions for Russia of Peter the Great, who strived to reform Russia and attempted to elevate it to the standards of contemporary European powers in many facets, including education, helping promote the importance of learning in the imperial government (3). He especially emphasized the importance of education, so when Lomonosov wrote of his desire to establish a university in Moscow to an influential courtier called Count Shuvalov, the Empress at that time signed the decree (3). From the founding of the Moscow State University, it is evident that the support and approval of the government, albeit in the form of a monarchy, is critical to the birth of an educational institution of higher learning. Yet, it is also relevant to note that in 1992, the university became funded directly from the state budget and not through the Ministry of Education, thus granting the institution more financial independence and lessening the power that the state had in directly influencing the university through concrete actions (2).

Throughout its history, the Moscow State University has relocated several times: it first occupied the Principle Medicine Store on Red Square from 1755 to 1787, moved by Catherine the Great to a Neoclassical building on the other side of Mokhovaya Street (2). Not only have the physical structures of the university changed, its scope of study and student body have evolved as well throughout the years. Specifically, in the 18th century, the university only had three departments (philosophy, medicine, and law), and since then, the areas of study have grown into 18 branches of science and humanities (2). Moreover, the political events in the past have also effected important changes to the students; one example is that the student unrest in 1905 that called for the abolishment of the Czarist government triggered the imperial government's threat to shut the university down (2). After the October Revolution of 1917, the Moscow State University began to accept children who belonged to the peasantry and the proletariats, hearkening a new era of progress, openness, and inclusivity (2). Thus, these two historical incidents underscore the close interactions of the university and the government, along with the potent effects that both had on each other throughout history.

Not only is it well-known for its status as one of the oldest universities in Russia, but it is also one of the Seven Sisters, a group of seven skyscrapers in Moscow  that were constructed in the Stalinist Empire style and are characterized by their colossal scale and elaborate, Baroque-style ornamentation on the building façade, serving as tools of the glorification of the Stalinist regime by showcasing its power and prestige through their massiveness and decadence. They dominate the urban landscape of Moscow, imposing, almost overwhelming presences that symbolize the extremely powerful nature of the government, an entity that permeated every aspect of the Soviet society. Furthermore Moscow State University purports to house the tallest educational building in the world, a claim that augments its status as not only a prestigious Russian university but also a symbol of Russian power and influence, with one of its professors in the 1950s remarking, "Its pulse was the pulse of the whole country" (3). The intersectionality of the state and the university still continues to this day, as the Moscow State University still regards athletic fitness as "essential for satisfactory academic achievement," a belief that is highly reminscient of the Soviet Stalinist regime (2). More importantly, the status of the Moscow State University is extremely lofty in contemporary Russia, with it being frequently ranked as the best university in Russia.