A Closer Look at the Map 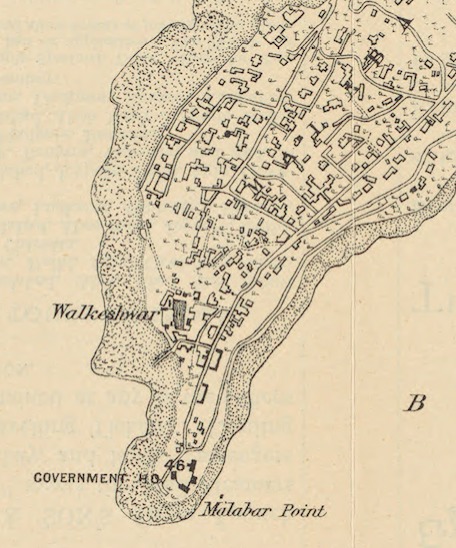 A Close-up of a portion of "Cook's Plan of Bombay., including the Walkeshwar region and Malabar Hill. A mix of meticulously drawn small roads, buildings, trees and terrain.

A Close Shot of a portion of the "Cook's Plan of Bombay" map, including Thomas Cook & Son's Bombay office marked.

Zooming in, the map clearly appears to have been sketched in great detail by hand, with small and less important buildings and structures drawn in with square or rectangular shapes and some areas dotted with small shapes that appear to be trees or general shrubbery. The map’s style combines an element of simplicity with that of intricacy to create a simplistic but comprehensive layout of the city, highlighting the notable landmarks, regions and roads of late 19th century Bombay and their overall geography while maintaining a simple, clean and consistent drawing style that omits excessive details and identification. The intricacy of the map comes not from fancy and aesthetics-oriented drawings, but the pure methodical, all-encompassing and somewhat disciplined manner in which seemingly each and every component of the city has been marked in a minimal yet recognizable way. Each building is not much more than a small enclosed shape, each tree is not more than a small line or two, each road is just a narrowly placed set of parallel lines with occasional names written in them, and each micro-region is not more than a blank, dotted or shaded space – a style simplistic and consistent enough that no particular section or element stands out more than the others. Without the names of landmarks and regions written in, one may have difficulty identifying and differentiating all the small shapes and lines on the map. However, although this map may not have required considerable artistic technique to draw, the incredible attention to detail and degree of discipline it likely took to draw such miniscule shapes on the map that are so close to one another, with a fair degree of accuracy, completes a map sufficiently informative and helpful for a foreigner in navigating oneself through an unfamiliar city.

This is a close shot of the bottom right edge of the "Cook's Plan of Bombay" map. It shows five of the 30 landmarks that adorn the edges of the map. 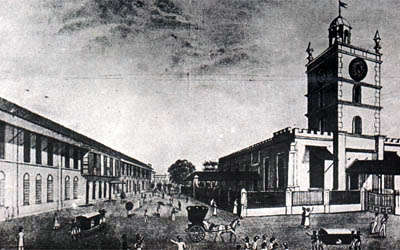 The St. Thomas Cathedral constructed by Charles Boone in 1718, and was the first Anglican Church in Bombay. The Cathedral is depicted as landmark number 36 in the close-shot of the map above.

While the main map, drawn in such a simplistic and disciplined manner as described, provides tourists with a general overview of where things are and how they are situated, the miniature depictions along the side are what really make this map one that is especially designed for tourists by providing them with a sort of preview of the gems that lie in the city, likely what is to come in the ensuing tour. Apart from adding aesthetic appeal to the map, these depictions may serve to provide tourists with a clearer representation of the landmarks, as they are only marked with numbers on the actual map of the city, and perhaps facilitate the process of searching for and identifying these landmarks when they officially travel throughout Bombay’s streets. If the purpose of these mini-sketches were to highlight or showcase just a few impressive structures of the city, perhaps there would have been fewer and larger depictions of the most extravagant or refined buildings of Bombay. However, the inclusion of most of the listed landmarks despite the consequent need to compromise larger size, as well as their practical placement along the border rather than in the more visible center, reflects the mapmaker’s prioritization of including as many of the structures as possible rather than spotlighting any one of them- perhaps to boast the diversity of the colony's structures or for the aforementioned practical reasons of tourists’ convenience in identifying structures.

In the case of this map of Bombay under British rule, one created from the British and meant for the British ruling class, the landmarks were likely depicted as a means to briefly reveal the many treasures of this valuable and fascinating foreign colony under the rule of their homeland. These are not merely tourist stops, but the extensive ‘results’ and ‘progress’ of the Empire’s progressive work that these wealthy individuals may have invested in or indirectly have a stake in. As a result, it was likely in the interest of the tour company, which by now was virtually an institution of the Empire, that as many of these landmarks were presented under a positive light to the very people who are tied to the Empire’s success and desire to illuminate the favorable sides of the Empire’s progress and influence. The map consequently lays out 'all there is to see' via its elaborate and intricately depicted visual representations of a large quantity of the city’s European-styled, well-developed and often intellectually, culturally or functionally significant landmarks.