A First Glance at "Cook's Plan of Bombay" 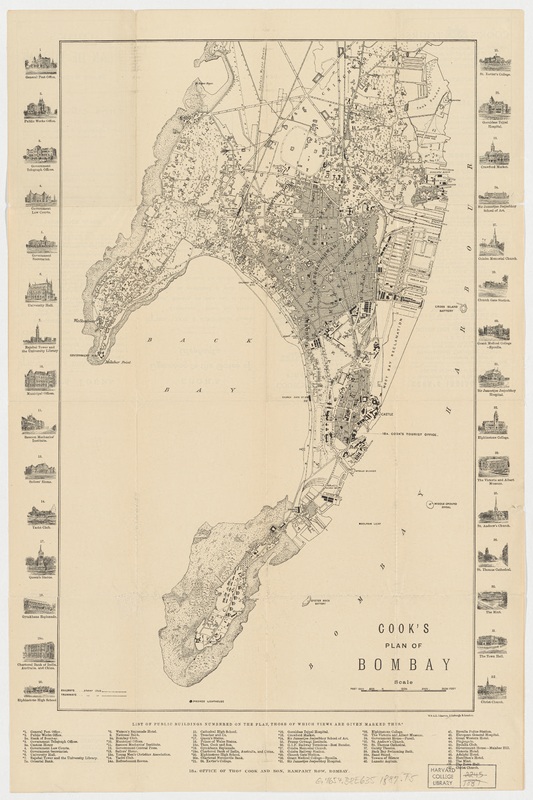 The map examined in this exhibit is entitled “Cook’s plan of Bombay,” published in London by the Thomas Cook & Son company in approximately 1887. The cover title of the map is noted as “Cook’s plan of Bombay: present to visitors to India,” indicating that the map was likely designed for tourists. The map is consequently completely in the English language, with its colors likely black and white printed on an ivory sheet of paper. Below the main map of Bombay is a “List of Public Buildings Numbered on the Plan, Those of Which Views are Given Marked Thus.*” There are a total of 52 landmarks listed, including post offices, government buildings, banks, hotels, educational institutions, churches, hospitals and Thomas Cook & Son’s own Bombay office. Each of the numbers that correspond to the 52 landmarks are marked on the actual map at the location of the landmark.

One of the most striking and noticeable elements of this map is the miniature drawings of thirty of the landmarks along the left and right sides of the map. A vertical row of these miniature sketches, each accompanied by its corresponding number above and name below, adorn each side of the central map that takes up the majority of the space. The names of those landmarks that are portrayed as miniature sketches along the sides are marked with an asterisk in the list at the bottom of the map, although there seem to be a few errors (i.e. number 4 is not asterisked yet appears as the fourth sketch on the left side; number 8 is asterisked yet is not depicted as a sketch; number 50 is not asterisked yet appears as the third sketch from the bottom on the right side.). It is unclear upon what basis these selections for sketches were made, as those omitted do not seem to share any specific characteristic in common.