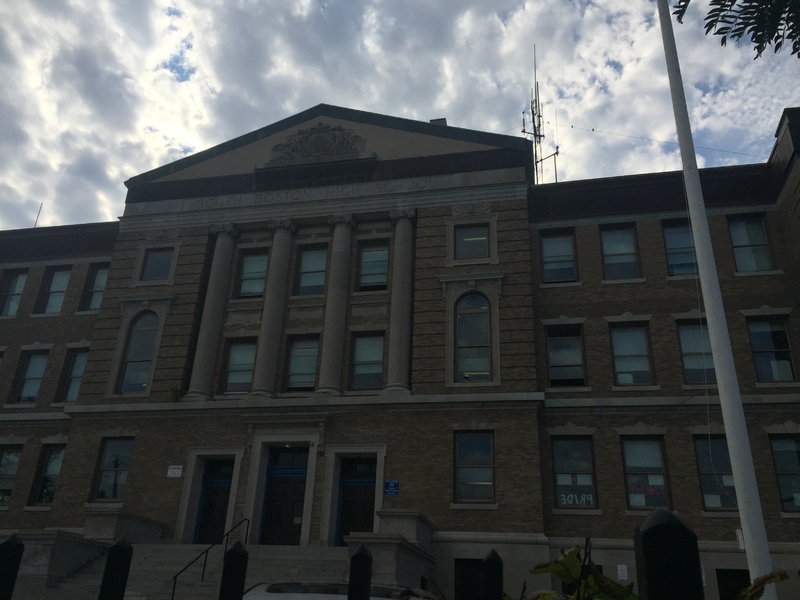 The crest of Telegraph Hill is elliptical in shape. Half of the ellipse is taken up by Thomas Park, whereas the other half is occupied by the old South Boston High School.

Built atop an old reservoir which provided water to South Boston, South Boston High, currently Excel High School, is the home of its own history quite separate from Washington, Thomas, and the occupation of Dorchester Heights. Boston became notorious nation-wide for the violence that resulted from court-mandated busing to end school desegregation in the 1970s, and much of that violence occurred in the quiet and seemingly peaceful Dorchester Heights.

A South Boston High teacher reflects on the busing desegregation riots a decade after they occurred. 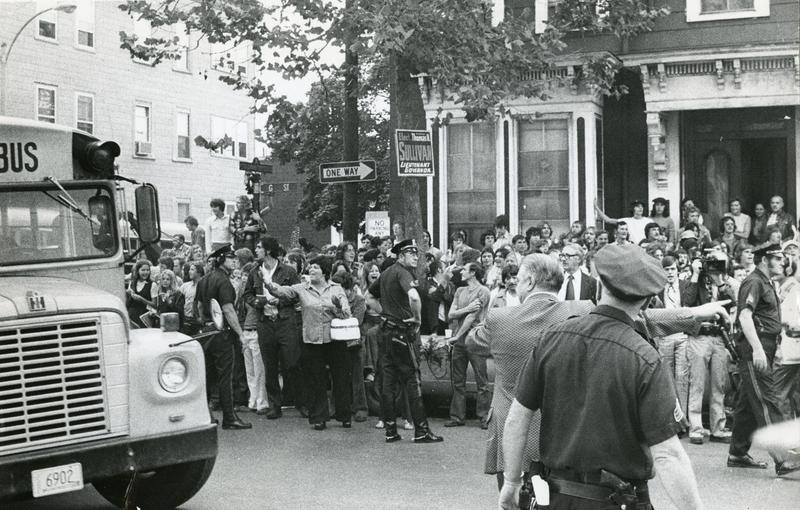 Police were often necessary to contain the protests of court-mandated busing at South Boston High. This picture of a 1976 protest shows was taken before violence erupted.

In the summer of 1974, a Boston district judge found that the Boston School Committee had deliberately segregated Boston's schools and mandated the use of busing as a means of desegregation. When school began in a few short months, 18,000 children would be bused to school districts outside of their neighborhoods (1).

South Boston High was the flashpoint of much of the violence surrounding busing in the 1970s, as protests and riots broke out in front of the school to protest the court order. South Boston residents, primarily white, Irish Catholics, were incensed at the idea of their children being bused to the majority-black neighborhood of Roxbury and vice versa. Buses were pelted with rocks and black students were assaulted, vocally and physically, as they attempted to go to class (1).

Racism and xenophobia fueled the anger of the Southie residents and minor incidents snowballed out of control in a dangerous fashion. Boston police outfitted in riot gear were often necessary to keep the crowds at bay, as President Gerald Ford opposed busing desegregation and refused to send the National Guard to keep the peace (1).

Within the first five years of busing, 30,000 middle class children were pulled out of the Boston school system and moved to parochial schools. Today, this imbalance continues, as half of Boston's children are white, and yet only 14% of BPS students are white (2). Busing, meant to ameliorate the segregation of races within Boston, because of the racism of the middle class whites has allowed the racial divide to be reborn as a class divide. The less well-off minority dominated neighborhoods must stick to Boston Public Schools, whereas the more well-off white neighborhoods can afford to send their children elsewhere and avoid the issue altogether.

The divide of social classes in Boston is similar to Engels' description of Manchester and might seem to contradict the argument that Dorchester Heights is integrated into the city, but in fact it actually serves to strengthen the point. Although the city of Boston as a whole is divided, the neighborhoods are relatively homogenous. In South Boston, rich and poor Irish Catholics banded together to protest busing; a shared ideal (even a racist one) brought the poor from the projects to Dorchester Heights to protest busing and South Boston as a community came together. 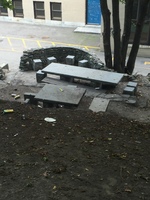 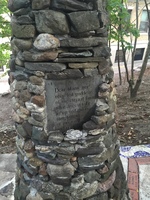 A cairn with a dedication to the Moon, a recycled goddess, stands at the beginning of the recycled pathway. 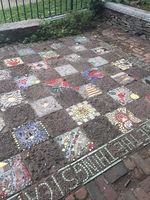 A mosaic stands behind South Boston High with a Catholic prayer encircling it.

Behind South Boston High is a pathway made of recycled material. Broken glass bottles and tiles are sunk into the cement pathway; rocks and bricks form a guiding wall. At the beginning of the path, a cairn stands and beseeches the Moon, formed from Earth refuse and therefore a 'recycled goddess,' how to rethink the twin temptations of passion and trash. These passions have clearly not been up-ended, as trash lines the pathway today. Nips of Fireball Whiskey and cans of cheap beer were thrown ironically on top of the pathway created from trash similarly littered. At the path's end is a mosaic of broken glass encircled by the popular Catholic Serenity Prayer.

This path forces reflection. The path, like Boston or the Moon, is made of recycled material. Boston acts as a pallimpsest of history and is hugely influenced by its past; Boston's present is riddled with examples of its past. The city is attempting to learn from its past mistakes, and yet still suffers from several mistakes that have proven hard to shake off. Once again underlining the Catholic dominance of Boston, the prayer mosaic at the end of the path causes the traveler to ponder what things in life can and cannot be changed.

"Lord, grant me the serenity to accept the things I cannot change,

The courage to change the things I can,

and the wisdom to know the difference."