At the geographic and cultural center of Dorchester Heights is Thomas Park, named for John Thomas' key role in occupying the Heights in 1776. Added to the National Register of Historic Places in 1966 and upkept by the National Park Service, Thomas Park is a well-kempt and unassuming green space in the middle of Southie (1). 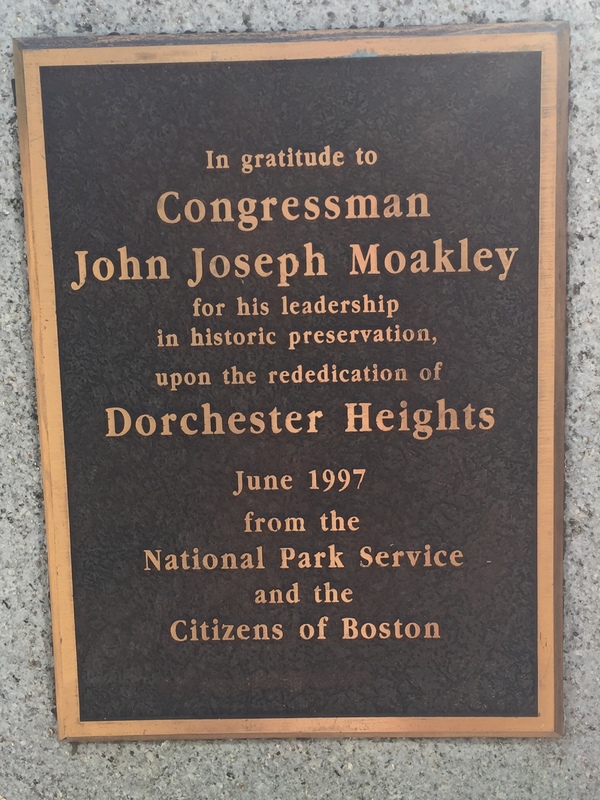 From the moment that you arrive at Thomas Park, you are aware of its location within South Boston and of the resulting implications. A plaque stands out to the traveler thanking Congressman Joe Moakley for his efforts in helping to make Dorchester Heights into a nationally recognized historic landmark.

Hailing from the projects of South Boston, Joe Moakley served in Congress for almost thirty years. He was a key-player in Tip O'Neil's Democratic House, which stood in opposition to Reagan in the 1980s, and served as the quintessential Massachusetts Irish Democrat. Praised for his working-class morals and dogged loyalty to his state, city, and neighborhood, Moakley was a much beloved and uncontroversial character of Massachusetts politics (in comparison to the Bulger brothers) (2).

Moakley's loyalty to his home, Southie, allowed him to recognize the cultural importance of Dorchester Heights as a Revolutionary landmark and work toward making it nationally reconized as such. The placement of Moakley's plaque as soon as you enter Thomas Park immediately brings to mind your location within the Irish Democrat Catholic stronghold of South Boston which played such a major role in American politics throughout the second half of the twentieth century.

Additionally, it is interesting to note that Moakley, who grew up in the projects down the hill and whose family could never have afforded to live in the Heights, is the first name that you see when you enter Dorchester Heights. Even before the traveler sees evidence of General George Washington, they see mention of Congressman Joe Moakley. This fact underlines the strong influence and integration of working class values into the upper-class Dorchester Heights. 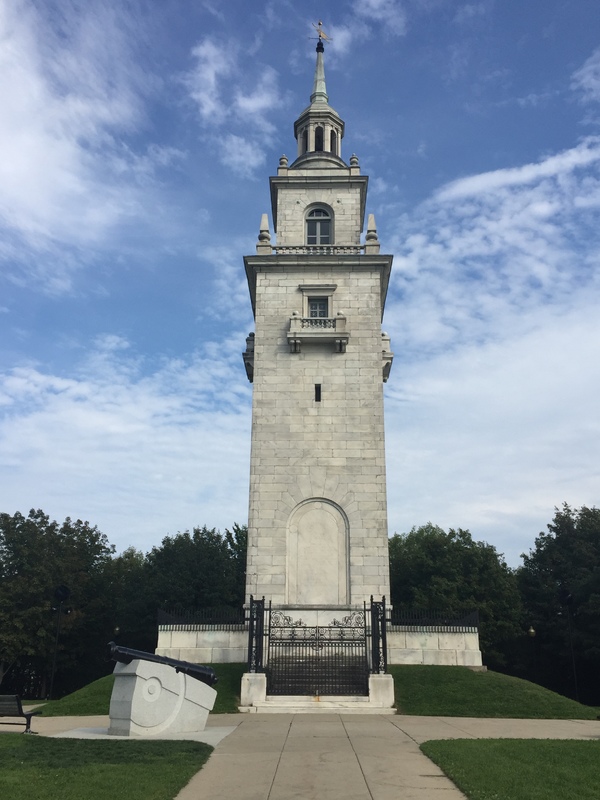 The Thomas Park Monument standsas a commemoration of the Occupation of Dorchester Heights by the Continental Army in 1776.

As you make your way into Thomas Park, all paths lead uphill and converge on one location. The Thomas Park Monument stands 115 feet tall atop Telegraph Hill in Dorchester Heights and is easily the most impressive edifice within a half mile radius. Built from white marble and designed to look like a church steeple, the monument was commissioned in 1902 and is the most visible object in Southie when viewed at a distance.

Adorned with numerous plaques describing Washington and Thomas' occupation of Dorchester Heights, a visitor is impressed by the imposing size of the gleaming white monument. For those aware of its existence, the monument stands like a beacon above the rest of the city reminding Boston of its importance in the American Revolution. However, despite its size, the monument is, in a sense, unassuming. Its similarity in design to a church allows it to blend in with the many other church steeples in Southie when viewed from a distance. This underlines the monument's significance in the Revolution: the Continental Army had a vantage point of Boston from Dorchester Heights, but the Royal Army could not reciprocate that view and were unaware of the number of troops or artillery positioned there.

Aside from the occasional dog-walker and far-away ambulance, the only sounds that are constant in Thomas Park are planes flying overhead on their way to Logan Airport.

Thomas Park is relatively quiet and unused as far as public parks in Boston go, even during busy times such as Friday evenings. Aside from the occasional dog-walker, the park stays relatively quiet and lifeless aside from the occasional squirrel or group of sparrows. The quiet that hangs over the park imparts a sense of calm and ease rather than an eerie feeling; besides the far off bark of an ambulance or the periodic drone of planes flying overhead to Logan Airport, Thomas Park allows the traveler to have their thoughts to themselves while overlooking downtown Boston. The renewed arrival of the Doppler shifting sound of overhead planes serves as a punctuation mark to reflection.