A Juxtaposition of Time & Place

The aqueduct is certainly alive and well today, towering above the city as an important cultural landmark and tourist destination. It is visible in the Fatih region of the city of Istanbul, and stands at an impressive 921 meters. Some more statistics to glean its grandeur: the width ranges from 7.75 metres to 8.24 metres; the pillars are 3.70 metres thick; and the arches in the lower order are 4 metres wide. It is today found between the hills of Istanbul University and the Fatih Mosque, and under its arches is the Ataturk Boulevard. The water today comes from two lines from the north-east of the city and another from the north-west. 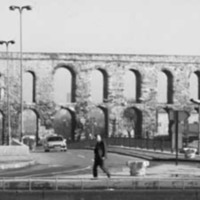 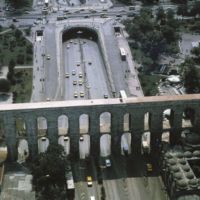 A view of the aqueduct from up above.

The Aqueduct seamlessly fits right into the modern urban fabric of the city of Istanbul. 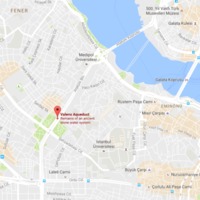 A look at where the Aqueduct stands today on the map.

The Aqueduct, with its years of wear and tear, now stands impressively integrated into modern Istanbul. Rather than being warded off as a relic of the past, this aqueduct is where the Atatürk Boulevard, one of the city’s busiest thoroughfares, passes right through. In this way, it stands to show an important juxtaposition of time and place that exists in this city. Whizzing right under this Roman ruin are cars and twenty-first century doings, yet the two remain juxtaposed peacefully. And in doing so, it is perhaps the ultimate symbolic lieu de memoir—while it may not serve the same functions it once did in terms of being a water source, it nonetheless serves a more symbolic function of bringing the past into the present. For visitors to the city today, the Aqueduct is a behemoth that serves as one of the first big “scenes” of the city that they witness, because a shuttle bus from the airport to the popular Taksim Square passes it directly underneath. And what they see is truly awe inspiring and a clear indication of the city’s rich past that is stitched wonderfully into its modern fabric.