The Anastasis of Chora Church

The Chora Church and monastery, first built in the early fourth century upon the burial site of holy Christian martyrs and boasting a history of over fifteen hundred years as a sacred space, was converted into a museum in 1948 and ceased to be a functioning mosque (1). The beautiful artwork commissioned by Metochites in the 14th century was brought to light from behind the wooden shutters and has since been restored by a joint effort by the Dumbarton Oaks Center for Byzantine Studies and the Byzantine Institute of America (2). Today, the Chora Museum, the Kariye Müzesi, is a popular tourist attraction in Istanbul for its beautiful Eastern Roman architecture and its rich history. It is commonly referred to as the second most important Byzantine church after the Hagia Sophia (2).

To say that Chora Church is a lieu de mémoire is not particularly surprising. This church was built around the reign of Constantine the Great and in the many centuries since it has remained relevant. Despite several earthquakes and the Latin occupation severely damaging the church, Chora has managed to be rebuilt several times over for its importance to Istanbul’s history. There seems to be something about this space which stops the process of forgetting and aids in the process of remembering, the essential role of a lieu de mémoire as proposed by Nora. 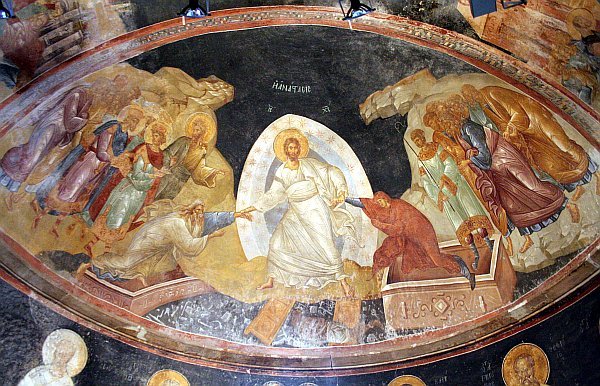 A fresco of the anastasis, or rebirth, of Christ. Like Jesus, Chora Church has gone through several rebirths in its history as a lieu de memoire.

Through history, the Chora Church transformed and metamorphosed into different functions by adapting to the political climate of Istanbul. This metamorphosis and rebirth of a holy space emphasizes a certain one of Metochites’ frescos in the church. In this fresco, featured on this page, we see the rebirth, or anastasis, of Christ. Chora Church, the church in the fields, was dedicated to Jesus, and similar to its patron, the church died but managed to become reborn into a new life. Destruction of Byzantine culture by invaders, time, and natural disasters has made it so many artifacts from ancient Constantinople have been lost, but somehow Chora Church, this lieu de mémoire, has avoided death and managed to be reborn several times. The Kariye Müzesi has managed to “immortalize death” (3), and stop time, capturing almost two millennia of history and memory in this sacred location.