The city of Boston, dubbed the “City of Champions” in recent decades, is a bustling hub of a fruitful combination of work and play. While Boston has recently experienced a technological renewal and is densely packed with fifty-four institutions of higher learning, it is also the home to extremely passionate sports fans of all ages who are particularly proud of their home teams across multiple sports. In fact, a recent study covered by the New York Times dubbed Boston “America’s most successful modern sports town,” with its four major pro sports teams having won championships in ten percent of the seasons in the past fifty years. (Leonhardt, 2015) These classic teams are the Celtics, Bruins, Patriots, and the Red Sox, but it is definitely the last of those four that holds a unique and special spot in the city’s rich cultural history. At the heart of Boston’s baseball history is Fenway Park, home to the Boston Red Sox and the oldest MLB ballpark in the country.

Fenway Park can be seen as a cultural center of entertainment in Boston. With a seating capacity of almost 38,000 (Vega, 2013), the ballpark is a central location where residents from not only Boston but potentially all over the country come together to enjoy a shared pastime. Through Fenway, Boston can celebrate a sense of anonymity that instead of ostracizing individuals due to unfamiliarity, actually brings a sense of unity to the civic community. Richard Sennet in his work, “The Public Realm,” outlines Hannah Arendt’s viewpoint on the public urban realm which can be applied beautifully to Fenway Park as a recreational center. He writes,

“[Hannah] Arendt’s celebration of citizens free and equal due to their anonymity found a particular home in cities. She is the advocate par excellence of the urban center – the agora in ancient Athens, the Uffizi piazza in medieval Florence, Trafalgar Square in modern London. Her measure of urban space is in terms of its density, since she believed that density produced the freedom of anonymity; she was, I think, willfully blind to the violence embodied by Nazi crowds . . . Despite that blindness, her views of the public realm have powerfully influenced urbanists to think of the city as something more than a mosaic of local communities, the whole greater than the sum of its parts, that greater whole to be located whenever and wherever a city establishes a vibrant, dense center.”

Here, Fenway Park can be seen as this “vibrant, dense center” that brings together anonymous people from all over the city and even country to eliminate the mosaic and contrast between local Bostonian communities and create a collective society joined together by the pastime of baseball. 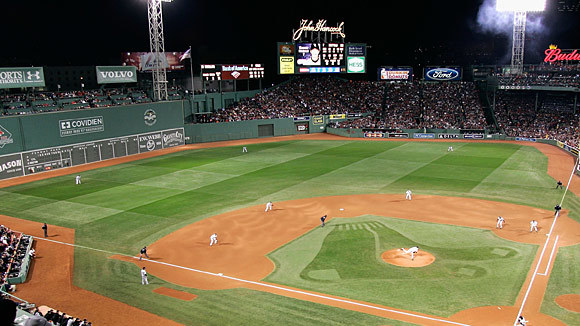 Aerial View of Fenway Park, With Focus on the Field

In this sense of being a cultural and entertainment center of the city, Fenway Park has not changed since its conception in the early 1900s. As Boston and its people changed in the century the ballpark has been open however, so has Fenway Park transformed in many other ways. While the aesthetic exterior and cultural significance of the park as a center of entertainment has largely remained throughout the years, its size, the surrounding area and level of commercialization in and around Fenway Park has changed. These deviations present Fenway Park as an interesting site of unique transformation as an urban palimpsest of Boston. As a massive athletic facility positioned in the middle of a very metropolitan region, it has maintained its historical aesthetic and cultural purpose, while layers of change in other aspects of the ballpark have been imposed upon each other to present the legendary Fenway Park as the urban palimpsest we see today.