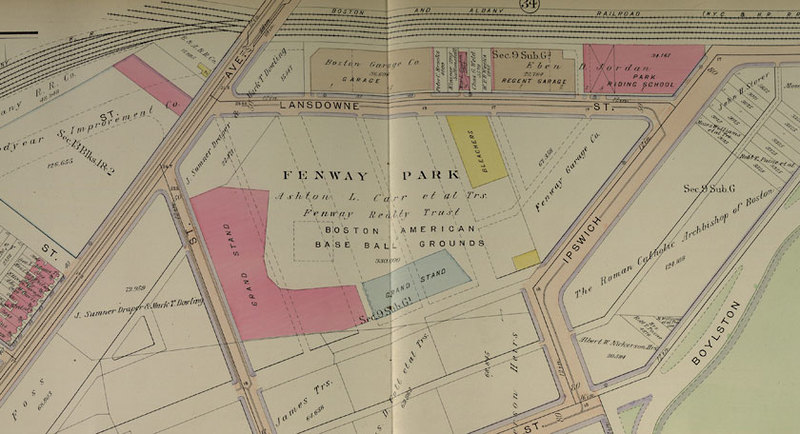 The location of Fenway Park in the Fenway-Kenmore neighborhood was one that was chosen very deliberately. Red Sox owner John I. Taylor chose this neighborhood as one that was an attractive site for relocation, especially because he was considering a possible sale of his team (MLB, 2016). The Fenway-Kenmore neighborhood was initially planned to be a high-class residential neighborhood, but instead turned into a site of higher education and institutions. Surrounding the ballpark today are schools like the Boston Conservatory and the Boston Arts Academy, both of which are not pictured in the corresponding 1912 map. The map instead shows a church and riding school, both of which no longer exist. The garages depicted however, do still exist, perhaps as one of the few institutions around the ballpark that has not changed. Despite these changes to the surroundings of Fenway, there has been little change to the ballpark's role as a civic center of entertainment. Despite elimination of churches and the introduction of new schools, Fenway still remains to be a site of unity in the Boston community. This observation highlights the possibility that civic centers are resilient against changes in its role once solidified and established, even when its surroundings are changing drastically and rapidly. This is a point not mentioned by Arendt and Sennet in "The Public Realm," but one that is very interesting and important to think about in the realm of Fenway Park as a civic center. 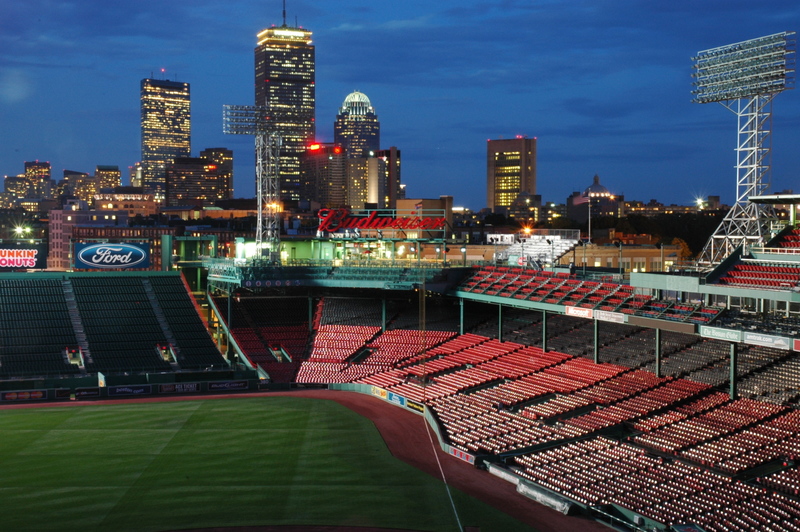 Perhaps most striking about the direct surroundings around the ballpark is the bustling Massachusetts Turnpike directly adjacent to Fenway. To get from the Kenmore T station to the park, one would cross a bridge above the turnpike as seen in the corresponding video. The stark contrast between an aesthetically historical structure and the contemporary bustle of a busy highway is striking. The turnpike, which began construction in 1958, long after the founding of the ballpark, was not officially completed until 2003 (Massdot, 2010). Its conception after the construction of Fenway Park and probably also alongside the numerous renovations made to the park throughout the century are a representation and symbol of the increasing technological and industrial aspects of the urban environment. In addition to the turnpike alongside the ballpark is also a beautiful view of the downtown Boston skyline, which pays tribute to the location of the park in such an urban and cosmopolitan environment.

Fenway Park is one of the most popular and iconic sites in the city of Boston, not only to tourists but also and especially to its residents. Highlighting the importance of recreation and sports in the New England city, the ballpark presents a reflection of Boston's history and also how it has changed through the past century. It is through this exact definition of Fenway Park that it acts as an urban palimpsest to Boston's rich past. Built as a massive civic center of entertainment, it has remained so, while its surroundings and the city itself imposed layers of change. While it has stayed the same in many aspects, it has also been altered in others, generating the beautiful and multifaceted ballpark of a palimpsest we see today.