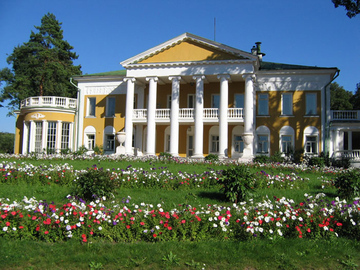 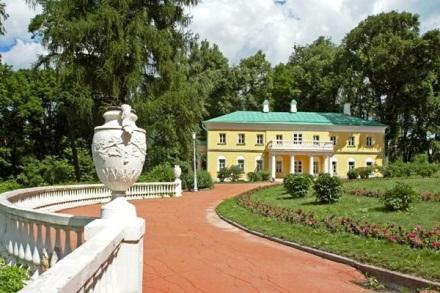 Wider angle view of the dacha's exterior and surrounding greenery

As we have seen so far, many famous dachas on the outskirts of Moscow were the homes of famed political officials, especially because of the political prominence of Moscow throughout Russian history. Vladimir Lenin, founder of the Russian Communist Party, leader of the Bolshevik Revolution and first head of the Soviet state, was no exception. He owned a lavish dacha in Gorki Leninskiye, an urban locality of Moscow that now honors and bears his name. Lenin took ownership of his dacha when he was instated into power in 1918, and frequently spent time there, especially in the last few years of his life. (1) In many ways Lenin’s dacha served similar purposes as a more typical dacha. For example, Lenin used it very much as an escape from his life in Moscow, especially near the time of his death, when he spent most of his time relaxing and recovering in his dacha. (1) However, the grand aesthetics of his dacha as seen in the images to the left reveal stark differences between this famed dacha and a more typical one. Lenin’s dacha was staffed heavily with cooks, security guards and other workers. (2) Additionally, he like other political leaders in Russian history, utilized his dacha to entertain foreign and important guests. (1) These specific differences separate Lenin’s dacha heavily from a more commonplace dacha and also highlight the incredible prominence of owners of these famed dachas.

Lenin’s involvement with his and other dachas also emphasizes the importance and prominence of the government in dacha culture. Because many dachas at the time were owned by the state, Lenin could designate dachas to certain people and supporters. For example, Demyan Bedny, a trusted correspondent to Lenin and heavy supporter of the Bolshevik cause, was given a government dacha in addition to the private one he already owned along with an official car and official driver. (3) This use of political power was not unique to Lenin and was actually a quite popular thing to do throughout Russian history. The simplicity of the dacha underscores the power and prominence of Russian politicians and rulers not only in their own world but also in the lives of others.