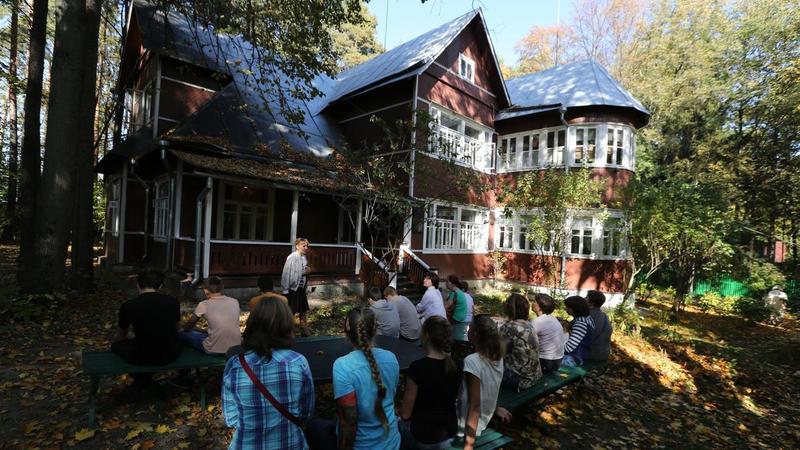 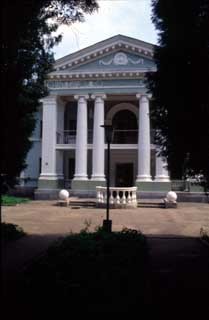 The dacha as a means of escape from urban society is epitomized in Peredelkino, a dacha complex just outside of Moscow. Unlike the political dachas we have seen thus far, Peredelkino is known for its high density of literary and scholarly Russian dacha-owners and was a refuge to escape to, especially for writers desiring inspiration in the nature outside of the busy city. Famous Russian writers that owned dachas in Peredelkino include Boris Pasternak and Kornei Chukovsky. (1) These dachas, while still fulfilling the roles of a “typical” dacha in providing refuge for its residents, are quite different from the common dacha and highlight the differences between these esteemed writers and the common Muscovite in 20th century Russian society. Not only were they usually more lavish, as seen in the images to the left, but they also served a more specific purpose that was quite unique to Peredelkino. The typical dacha was used as a weekend or summer getaway from the hectic urban life, but dachas in Peredelkino were for the most part only owned by writers and poets. Therefore, the Peredelkino dachas served the particular purpose of offering inspiration to its residents in a less recreational and more occupational way. 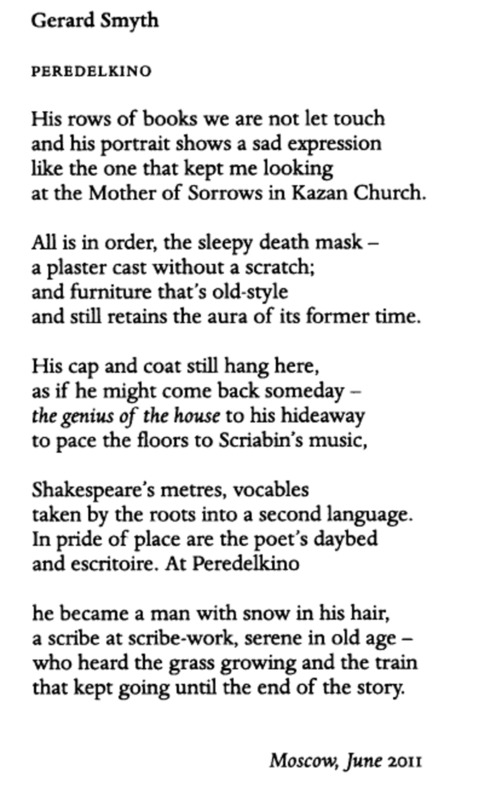 The purpose of the Peredelkino dachas to aid its residents in their work is epitomized also in this poem to the right written by Gerard Smyth in 2011 titled “Peredelkino.” It tells the story of an old poet who has not frequented his Peredelkino dacha in quite some time and also details the wonders that the dacha has done for the poet in terms of the his literary career. Smyth regards the poet as the “genius of the house,” something that would never be used in reference to a more typical dacha and highlights the specific and unique uses of these Peredelkino dachas.

Peredelkino not only signifies the separation and differences between the commonplace and the famed in Russia at the time of its peak existence in the mid and late 1900s, but contemporary Peredelkino also highlights a deviation away from the “typical” dacha culture toward modernization. Today, Peredelkino, while still the home to many writers and their families, is increasingly filled with construction by a wave of “new Russians”(2) or newly-rich business class individuals in post-Soviet society. An article in the LA Times laments the transformation of Peredelkino into a complex of lavish homes of Muscovite billionaires. Williams in her article writes, “In the colony's heyday, many of the cottages offered sweeping views of the field stretching nearly a mile between the birch alley and the 15th century Church of the Transfiguration. Today, the church and convent are no longer visible from the alley, blocked by the mansion complex and overshadowed by a recently constructed temple put up by one of the billionaires in memory of his mother,” (3) highlighting the deviations of these dachas from the commonplace dacha not only a century ago, but also today.